Vikram is finally able to write something with his hands. He is worried about its quality and appeal more than he has ever been in his career as a writer. His heart beats frantically, but it’s more so because of an emotion he has never experienced before.

When Vikram handed her the letter the day after she returned, he saw a look of disbelief on Malini’s face. He hadn’t said anything but just placed the letter in her hand. Her hands had felt the dotted impressions immediately, but her mind was taking its time believing it. She passed her hand over the sheet of paper and sat down without a word.

Vikram watched her both keenly and apprehensively as her fingers traced the characters slowly. Varsha joined them a minute later but froze when she saw the two of them. She knew what was happening before she saw her sister read something she had never read herself. She had seen it in his eyes.

When she was halfway through, Malini turned her face slightly to the right, continuing to trace the characters. She didn’t want to obscure Vikram’s feelings with her tears. Varsha cupped her mouth to prevent herself from crying out loud while Vikram felt his heart beating at a frenetic rate. His heart beat even faster as he saw Malini continue moving her fingers despite their shaking. 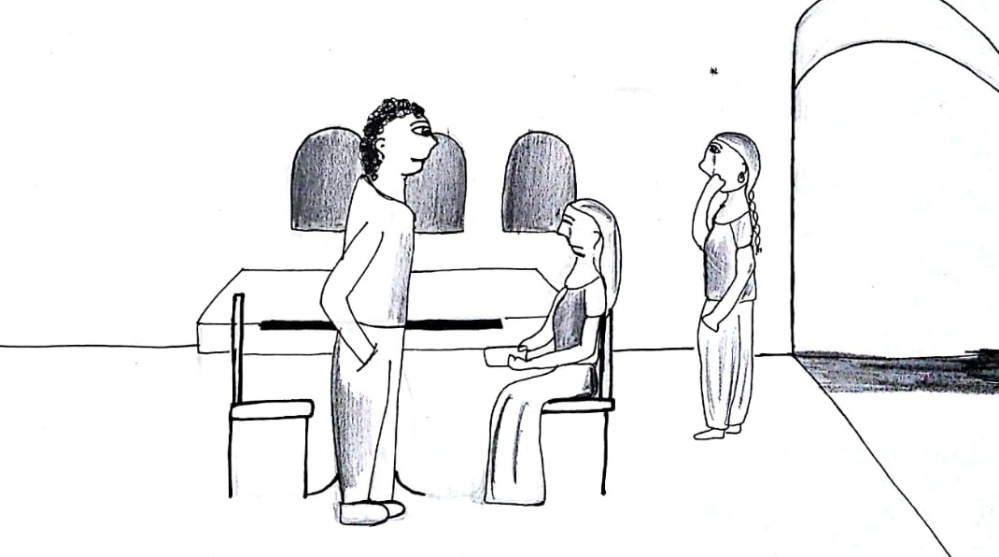 By the time she was done reading, Malini was crying freely. She covered her eyes with one hand and turned away, keeping the other hand fixed on the paper. Vikram could do nothing but watch her as she let the tears flow. His own vision started to blur as Malini outstretched her free hand towards him. He didn’t take it but went down on his knees and embraced her.

“But…but it would have taken you so long… to learn….to write this!” she said.

“Your hands….they must….they must have hurt!” she said amidst her flurry of tears.

“It didn’t hurt, Malini. It took me two days to write this, but not because of my bum hands. I wrote the entire thing in an hour. The rest of the time I was just sitting there thinking about you. For the first time in my life, I could see all the words before my hand moved. It is the first time my first draft is the final draft.”

She didn’t say anything but tightened her arms around him and sobbed even more uncontrollably. Vikram couldn’t help but chuckle. It turned into laughter. The tears flowed through his eyes but he laughed.

“But I won’t be able to sign anything for you! You’ll still have to depend on your housekeeper!” said Malini.

“It’s alright. She’s not that bad to have around,” said Vikram.

“Love someone like you,” corrected Vikram. She dug her face deeper into his shoulder blade and flooded it with her tears.

“Because there’s no one like you,” replied Vikram. “You’re not an empty shell. You have so much inside you that you cannot resonate with the outside world. But if you’ll allow me, I can help bridge that gap. I’ll always be with you, reflecting the bright light you have within. You can keep humming, though. It’s the sweetest sound in the world.”

She let go of him and wiped her tears after a couple of minutes. She then passed her hand over the letter again before tracing Vikram’s face with it. It was the first time she had looked at him.

As his eyes stopped welling up with tears, he felt a clarity he had never felt before. This is what it feels like to be loved by someone you love, he thought to himself. His hands had abandoned their support for his writing, but his mind had attained a lucidity that negated his problem. He needed to lose something to get something of greater value. Noel had said that he would find a way to get around things when he stopped obsessing over it. Vikram understood the meaning behind his words only when he sat there experiencing paroxysms of numerous emotions.

Writing was his purpose in life, and his hands had been the tools to fulfil that purpose. He had always believed he excelled in it because of the tools he was bestowed with. Until that day, the words had presented themselves to him but there was always a distance. He had chased after them with his surgeon-like hands. He never realized when he had begun depending on them more than he ought to have.

But now the words stood by him and sat next to him. He walked arm in arm with them. By spending time with Malini, he realized that just because he was robbed of interacting with the world through one channel didn’t mean he had lost the faculty altogether.