Vikram and Malini get closer as the two spend more and more time together. Opening up to each other is much easier than talking out loud to themselves for the both of them. As they continue seeing each other on a daily basis, Vikram finds a way to overcome his writing handicap.

Vikram spent his evenings at Malini’s for the next month. He would go there when she was done giving lessons. He would then read to the sisters. They always sat in the living room or on the patio if the weather was pleasant. The house had two rooms but Vikram had only ever seen the living room. It was rather large and had a set of small mattresses lined in one corner where Malini gave her lessons. A sofa set and coffee table occupied the main area, and the rest was empty space. The lack of furniture didn’t look like the result of poor interior planning. It separated the dining table from the sofa set.

After the first few days, he started spending time with Malini once he was done reading to them. Varsha hadn’t objected to it, but there was a hesitance in Malini’s manner whenever they were alone. They would often go out for a walk at night. Vikram noticed how Malini would always bring something up to talk about, careful not to let any silence creep between them. It helped them tell each other everything about themselves.

Malini told him about her childhood. Her mother had passed away giving birth to her, and her father had died from a heart attack a few years ago. He used to teach economics at a university and had homeschooled Malini. She owed her practical and reasoning mind to her father, while she owed her creativity to her sister. She had read to her since as long as she could remember.

Vikram told her about his life and even bared the details of his recent troubles. He even told her how he had to hire a housekeeper just to sign for him on routine household bills and packages. Listening to him talk about it made her feel dejected. She understood how integral writing was to Vikram and that he had nothing outside of it. He had found purpose quite early in his life, something that takes people years, but he was now unable to fulfil it. She had spent her life adjusting to the disability she was born with, but she had never felt helpless. Listening to him talk, she realized how miserable he felt. His voice suggested an outward appearance that didn’t match his words. But Malini’s handicap had always helped her identify the underlying emotions and feel what the other person was going through. It saddened her to listen to him talk about it.

Malini said she had never wanted to be like other people or be treated normally. Her definition of normal differed from that of others and she had never tried mixing the two. The only thing that made her feel cheated was her inability to see facial expressions. She could understand anyone’s state of mind by the tone of their voice, but not being able to see facial expressions was the only thing she had to complain about.

She told him how she was afraid of the dark. Vikram tried asking her what she meant by it in the least offensive manner. Her idea of darkness was not having anyone around. She could always sense the presence of those around her, but when she didn’t sense anything she felt frightened. It was then that she would hum to herself. As she saw it, darkness was the lack of light, and she associated light with life. Lack of light meant lack of life, which was why she was afraid of it.

“You’d think it strange, for my world is enveloped in darkness,” she had said. Vikram hadn’t known what to say. “But I’ve always considered myself an empty shell, you know. Without my eyes, I have to rely on the words of others for the appearance of things. Sure, I can feel the shapes and surfaces with my hands, but it’s not enough to paint a vivid picture. In that sense, I feel like a machine. I’m fed data which I can’t always confirm myself.”

She had said all that casually, as if telling someone her address. She wasn’t complaining but simply stating the facts. It hurt him all the same, though. She wasn’t a distraught person, but there was something lacking in her.

Vikram had always considered people to be either light emitters or reflectors. He knew that Malini was an emitter, but she had never been able to kick the source of her light into action. Vikram considered himself a philosopher and an intellectual, but he knew he was a reflector. He wanted to trigger the source of her light and be its reflector. From that point on he put himself to the task. He figured out the way when he found her reading a magazine written in braille.

Vikram wasted no time in getting a braille slate and stylus. He then spent all the time he wasn’t with Malini to learn braille. He didn’t have anything else to do and there was no one to disturb him. His housekeeper watched him but didn’t say anything. She would just sit under the window, watching him rack his brains all day. He ate little and didn’t complain if she cooked something he didn’t particularly like. 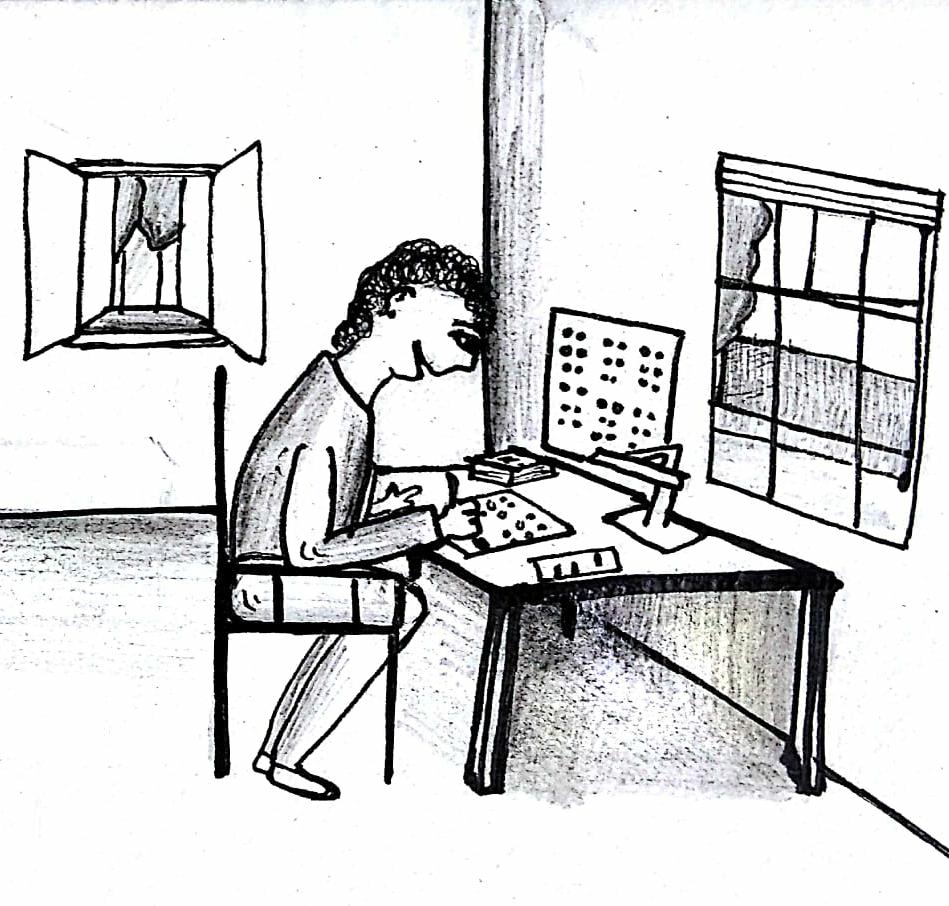 Vikram continued going there when he finished reading his novel to Malini and Varsha. He tried learning the harmonica but he just couldn’t control his breathing. It came naturally to Malini, though, as the words came naturally to him.

When he saw her play he wondered if he was taking advantage of her.

She was an unusually gentle soul, but her blindness made people uncomfortable near her and she didn’t have any friends. Her students were the only company she had other than her sister. Vikram knew he was in love with her, but he wondered if it was wrong, because he knew she had started to be dependent on him. She didn’t need his support, but he knew she looked forward to meeting him every day. He wondered if he was taking advantage of that by asking her to love him so that she could continue seeing him.

He thought a lot about it, but in the end, decided to go forward with his plan. He realized love is a selfish thing. One doesn’t love anyone for the sake of the other but for their own peace and happiness. All the acts of love only strengthen that feeling. But it fit with the way he had lived his life. He had never sought to work for the sake of others. He had only ever worked for his own benefit, but he had always done so in a manner where he wasn’t hurting anyone or taking something that was someone else’s by right. He had just lived by his principles and values. Love, as he saw it, was something along the same lines.

He was determined to learn braille and write something for Malini. He was taking the same path he had taken for charming many women before, but this time it was different. He had never had to make an effort before. This time, he wanted to make that effort. This time, he was actually frightened of what would happen if things went wrong.

Vikram had taken Malini out to dinner a couple of times. He had been wary of doing so at first, but he felt he would insult her by not asking. She had consented immediately, and their two dates had worked out pretty well. Varsha had stopped being near them when he visited. She didn’t go out of her way to leave them alone, but Vikram could see that she was giving them their space.

Despite his constant and industrious effort, it took Vikram a little over two months to get comfortable with braille. He could now write without having to consult the correct notation for each letter, punctuation, or combination, and his writing was more or less accurate. Malini and Varsha were supposed to visit their aunt in Nasik over the weekend, and Vikram spent those two days glued to his desk. It felt ironic to him that he would write the most important thing in his life only when he had lost the ability to write.